Type your search terms above and press return to see the search results.

First and foremost, I want to wish everyone a happy Memorial Day!  I am able to enjoy some time with my parents, my sister and her boyfriend, as well as good family friends today to celebrate.

Last week I had a couple of precious hours with nothing to do.  Instead of lounging with a book on the couch – a regular practice when I have some time to myself – I decided to pickle the radishes from 1,000 Stone Farm that I had bought at the Farmer’s Market the weekend before.

On our first couple of dates, Sawyer quickly learned that I – being a native southwesterner – love spicy foods.  I could put jalapeños (or any hot pepper) on anything, and I know quite a few recipes that revolve around jalapeños as the main ingredient.  When I pickle vegetables, I like to add a bit of a kick, and my radishes from last week are no exception.

I am not a natural-born cook.  For many years, I survived off of toast, cold cut sandwiches, microwaveable cups of ramen noodles and cans of SpaghettiOs.  In fact, until recently, I avoided being in the kitchen altogether.  But inspiration struck when Sunrise Spot provided me my retro red kitchen countertop and just enough space for Sawyer and I to work side-by-side on a feast for two.  Anything with jalapeños in it, I’ve attempted to make, from poppers to salsa to Mexicali pasta with peppers and beyond.  I even acquired two cookbooks – The Kinfolk Table and party-perfect bites – that I keep stacked together on top of the refrigerator and I absolutely love making recipes from (if you’re looking for inspiration, my first and favorite recipe thus far from Kinfolk has been spicy basil lemon chicken with Caprese salad on crostini – page 57).

My mother, a little suspicious that the End of Times may be coming up fast what with global warming and potential political leaders rising to power, has a stockpile of old Ball canning jars lying around that she has given me a couple of (you know, just in case).  It was a perfect excuse to pickle.

To begin, I only had one bunch of radishes, which makes for a simple recipe.

I mixed red pepper flakes, fennel seeds, black peppercorns, and mustard seeds in a baggie for when the radishes had been prepared.  To prepare the radishes, cut off the stems and any tops they may have and rinse under cold water.  I then made thin slices of all the radishes and dumped them into the Ball jar.  This is what always takes me the longest, as I’m not all too confident with a knife.  Slow and steady is my pace when it comes to chopping, slicing, or otherwise disfiguring the vegetables.

I topped the radishes with my red pepper-fennel-peppercorn-mustard seed mixture and moved to the stovetop, where I had set to boil 3/4 cup apple cider vinegar, 3/4 cup water, 3 tablespoons of Green Mountain Bee Farm honey, and 1/2 teaspoon sea salt.

After about 7-8 minutes of stirring occasionally, the mixture was boiling and I was ready to pour it over my preprepared radishes and spices.  Once fully realized, I set the jar uncapped on the counter for a couple of hours at room temperature to let the concoction soak into the skin of the radishes.  After those hours had passed, I put the cap on the jar and put the radishes in the refrigerator. 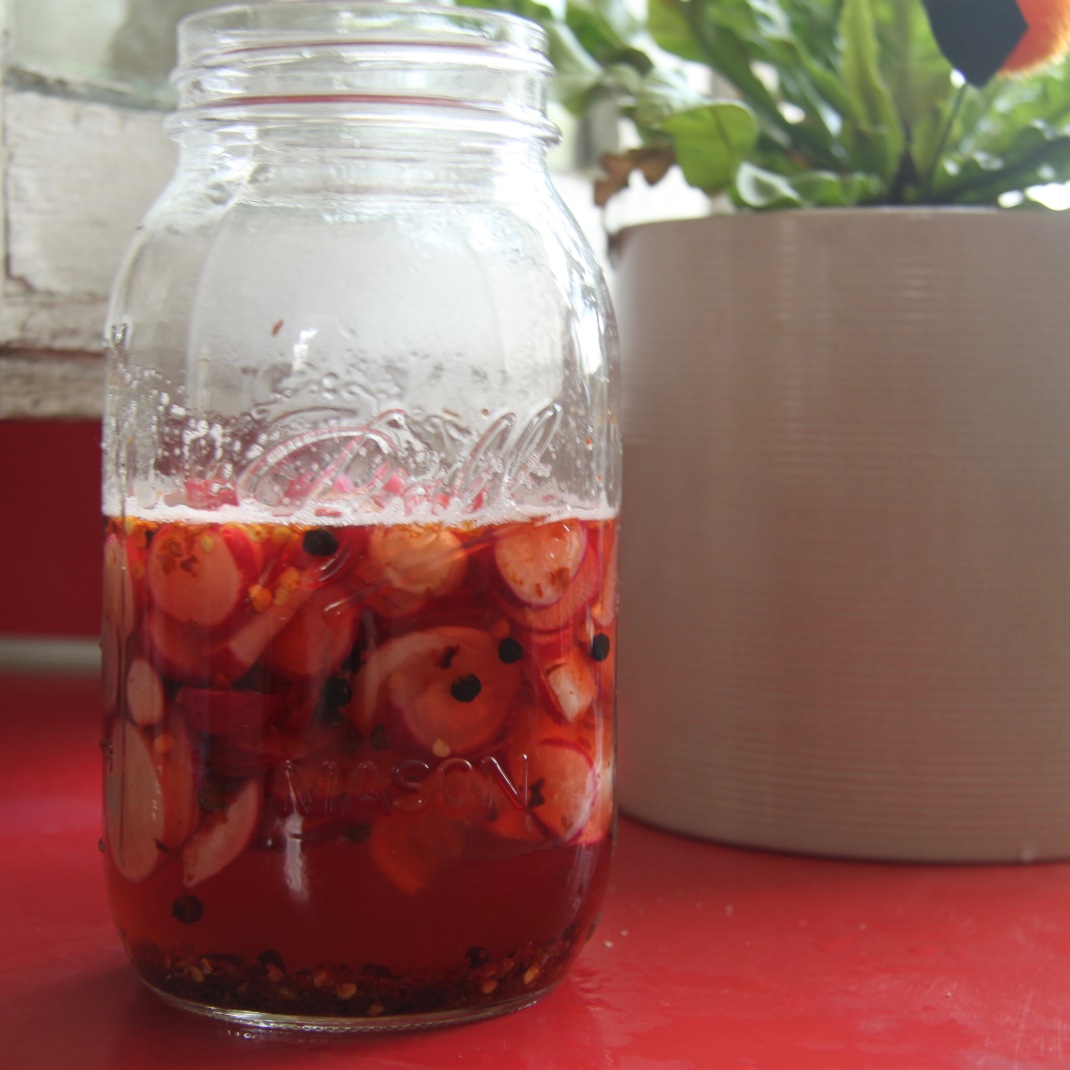 Sawyer and I regularly celebrate “taco Tuesday” with homemade tacos, and these spicy radishes are going to be a brilliant addition for tomorrow’s dinner.